On Thursday the 7th of May we played in Cumann na mBunscol in Glencorrib pitch. We first played Coill a’tSidheain we won that match. After that then we played Ballycushion we won that match aswell, but finally it was time for the final match and we played Gortjordan it was a close match but we won by a point in the end. We have another match next week. Everyone enjoyed themselves. Come on Glencorrib!! 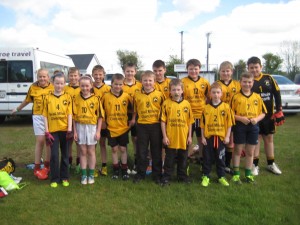